GG is out of her home, with her possessions, but still fighting. Watch this space for more actions.

GG and her friends closed down the U.S. Bank in Oakland on Friday, April 19, and held a high-profile action at the U.S. Bank in Montclair today. See the front page of this site for details on Monday’s action and phone blast.

At around 9:00 a.m., the sheriff’s deputies arrived and got into the house through the side door.  A real estate agent, Phi Nguyen, accompanied the deputies.

GG was there, and so was her tenant, who has a right to be separately evicted and 90 days to comply. The deputies demanded that they both leave and when Gigi argued. one of them pulled a gun on her. GG and her tenant both left.  The tenant went to her sister’s. The deputies left, leaving at least two security guards.  A locksmith was either already there or arrived.

About 15 people came to show support, but were unable to get in. The locksmith changed all the locks and the two security guards who stayed said that the plan was to guard the house 24/7. Although the sheriff told GG she has 15 days to remove her possessions, the realtor told her she can only get back in the house if she comes with a truck.

This afternoon, about 30 people gathered to support GG at U.S. Bank in Oakland, but the cowardly banksters would not let GG or anyone else, including their other customers, in the door. More actions and phone blasts are planned for Monday. Watch this space.

A new judge has yet to rule on an extended stay of eviction, but meanwhile the Alameda sheriff’s department has an open eviction order. These cops (the same ones who brutalized OO/Alan Blueford activist Mollie Costello at the Justice 4 Alan Blueford rally at the Courthouse) could come at any time. 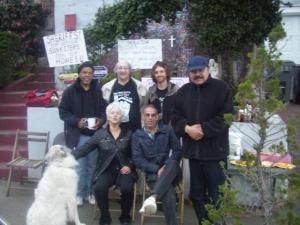 Some members of the Occupy Oakland Foreclosure Defense Group gathered at GG’s house early Tuesday morning in case the sheriffs came, but Tuesday wasn’t the day. (That’s GG, second from the left.) It was, however, a good day for doughnuts.

One of the hardcore fighters in OOFDG, GG Winter, was successful in quashing her immediate foreclosure eviction, which Capital One bank had ordered for Tuesday, February 26. The new date is likely to be Tuesday, March 26. Watch this space and sign up for our text alerts (text 69302) to be ready to support keeping GG in her home!

GG has been successfully fighting the banksters since 2008 and continues that battle today. She is still in her happy home, but the capitalist onslaught is relentless. On February 14th (although a judge had promised her personally that it wouldn’t happen), the court sent an eviction order to the Alameda County Sheriff to evict her, her roommate and all furniture and personal belongings.

The eviction is set for February 26 (next Tuesday) at 6 am.

GG is no stranger to the fight against capitalist imperialists. Her parents demonstrated for Tom Mooney at the 1932 Worlds Fair. Her mother got 6 months and her father got a year in prison. Her father was in the historic heroic general strike in San Francisco in 1934. Her father later organized the ILWU (International Longshore and Warehouse Union) local in Sacramento. He was a union leader and was paid the same as the workers. The Workers always said “he’d give you the shirt off his back”

…and GG is the same way because her parents were Reds. She remembers fondly as a child being held by Paul Robeson. At 14, she went on strike in the Sacramento pear cannery. As a young married woman with kids, she worked for the phone company, and was a union shop steward in the Comunication Workers Union in San Francisco. She was a member of the Maoist-oriented Progressive Labor Party, which was fighting against the Imperialist wars ,racist killer police ,organizing the Mission Tenants Union and leading the historic 1968 San Francisco State University strike.

Later, still living in Sacramento, she learned the International Brotherhood of Electrical Workers were hiring women. She joined the union as an apprentice and worked her way up to journeyman. She worked in the IBEW for 30 years. During this time she also led three trips to Russia, talking and visiting with everyday Russian workers. She befriended Bill Mandel.

Since 2008, she has been fighting foreclosure in her Oakland home. She has been through numerous close calls. On February 7, she went to court, and Judge Clay ruled not to evict her; however, the court docket for that day says the opposite. She is moving to quash the eviction order, since it is a lie and goes against the judge’s decision.